An interview with Jeannie McKeown 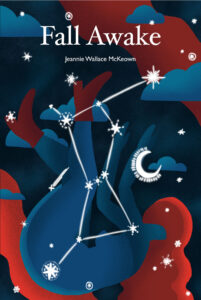 Fall Awake, Jeannie McKeown’s latest volume of poetry, came out during lockdown and thus missed out on the fanfare it deserves. This month we’d like to celebrate the collection by bringing you an interview with Jeannie herself. 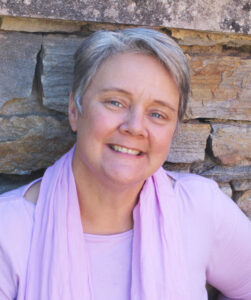 Modjaji: I first just wanted to ask how it was publishing Fall Awake in lockdown?

Jeannie: I’ve seen it called the co-void! What a thing for an entire industry to be held up like that. I haven’t had a launch yet, and that’s something I do want to do. We like our launches in Grahamstown/Makhanda; it’s a special event; everyone comes out and everybody knows everybody.

It has been a few years since the manuscript was accepted for publication, and when I look at it now, I think there are poems in there that I would struggle to read aloud at a launch. Some of them I’ve read many times, but some of them about are about a divorce that was a long time ago. I feel like a very different person, and I wonder whether it would be worth dredging up the emotion in those poems again.

Modjaji: I can imagine that holding a launch in person would be fairly impossible at the moment?

Jeannie: No, you can’t at the moment, it just wouldn’t be sensible or wise. The lockdown happened and put an end to everything, but the last launch in Grahamstown was a Modjaji book, which is great. But come the middle of March, there I was with all my books and nothing to do except reach out to people on social media and say, “they’re here!” A number of people have bought a copy, or shown interest, but it feels a little bit like it’s still in limbo. I’m hoping that we will soon be at a point when we can do a launch and I can do some readings. It’s been an interesting experience.

Modjaji: There’s almost a novel-esque sense to Fall Awake with the narrative flow between the poems. What made you decide to write that way?

Jeannie: I’m glad that came through, it was intended to – and I had the help of a great editor in Megan Hall. There are poems in the collection that were written in 2012, so it goes back a long way. In 2014 and 2015, I did the MA in Creative Writing here at Rhodes, which requires a two part thesis – a reflective, more academic section and a creative output. The thesis didn’t really have an arc. There were a lot of poems in that which didn’t make it into Fall Awake, but certainly when I looked at the thesis years later I found it boring, and wanted the collection to have a narrative arc which actually speaks to people.

“Boots”, which opens the collection, was written in 2012, the year I got divorced. I was reassessing all sorts of things – how to live alone, my sexuality, my identity outside of being a parent. That poem for me marks an important point in my own acknowledgement of self; it’s a huge poem of identity, so I started with that. I then thought, what sort of story am I trying to tell here? It’s the story of how you can live 20 years of a life and still be looking for yourself and how that feels along the way. How it feels getting married, how it feels having kids, getting divorced… nobody gets married thinking they’ll get divorced. It was devastating at the time, so that’s where those poems come in.

Then there’s the coming out (in all senses) on the other side and trying to live more authentically. You can’t keep supressing yourself forever; eventually the other parts of you rebel. So “Boots” talks to “Hats” at the end, because “Boots” is wishful whereas “Hats” is fulfilment. It’s not the end of the story but I wanted that arc of authenticity, a journey of discovery.

Modjaji: Could you share a bit about your previous writing experience was with Voices of This Land, and For Rhino in a Shrinking World?

Jeannie: Fall Awake is my first solo collection but I’ve been lucky enough to find space in various journals and anthologies. I think For Rhino in a Shrinking World was the first time I’d had anything accepted into an anthology, so that was quite a thrill. A worldwide group of poets were sending in poems; the youngest person to have a poem in that anthology was seven. I was extremely grateful to be a part of that, all writing to try and save South Africa’s rhinos from extinction.

What was especially touching for me was that my Mom submitted a poem which was also accepted; she generally wrote short stories, but when she saw Harry Owen’s call for submissions, she wrote a chilling piece from the perspective of the Rhino gods. For me, that particular collection is really special because we are in there together.

Then Voices of This Land was a strange one, because I got an email from someone I didn’t know saying that they were putting together a textbook for university students and could they use my poem. I said sure, that sounds great, but what poem are you wanting to use? They hadn’t mentioned that in the first email! The poem is “Higgs Boson” and they had found it in New Coin.

Modjaji: Are you a part of any writing groups or workshops?

Jeannie: There’s a fantastic writing group here. This group never stops; it keeps going – there is a core of five or six of us and then some lurkers, because we’ve had to move online due to Covid, rather than sitting around a table. I think every person in the group has submitted something to the McGregor competition, Love in the Time of Covid – we buoy each other up.

One year, we decided we were going to write and just send things out – send it, send it, send it – and see what came back, and we agreed that what came back would probably be rejections, and maybe occasionally there might be an acceptance. So we aimed for 100 rejections in a year. This flip of perspective to getting your work out there was quite something, especially for the people in the group who had published less and were shyer about submitting. Our little group has had work published in lots of places now. I’m a huge believer in having a group of people that you can trust, that you can write with; the support and the constructive critical eye, when requested, and of course just the joy of keeping company with other writer friends.

Modjaji: Are there any specific books or poetry collections or any inspirations that made you want to write in the first place?

Jeannie: Not so much that made me want to write because I’ve always written. My inspiration for writing would have been youth novels, but for poetry, some of the people that really influenced me during the MA, when I was introduced to them for the first time… Sharon Olds, Carol Ann Duffy, Karen Solies, and of course the South African female poets, most of whom are published by Modjaji.

Modjaji: Being published with Modjaji as a collection of female poets must be special?

Jeannie: I really wanted to publish with Modjaji. At the end of the MA I started putting things together and then there was an open submission period. It was three years before Fall Awake came out but Modjaji as a feminist woman’s press is important to me; as a pansexual feminist, I wanted to be a part of Modjaji, and I’m thrilled that it happened.

Modjaji: Is there anything in the works coming up?

Jeannie: I have so many poems… about five years ago my Mom died quite suddenly, and out of the many poems I wrote about her death, there are maybe five that I would like to make part of the story through publication. Then this year my Dad died, so there’s poems about losing both of them, and then the time in between. The story of my kids getting older – there’s definitely more story to tell. But first, more editing! Poems have to speak to other people, not just to me. So yes, there will be another one, and many more poems to write.